All photos by Jean Weber unless otherwise noted. Click on a thumbnail image to see it larger. Note: not all thumbnails have larger files linked to them, and some file sizes are fairly large, so not recommended for people using dial-up connections.

Albums of photos from the trip — more than are shown on these pages.

See Part 1 of this report for maps. You can also look up the Google Maps reference for the area.

Various activities today. Starting in the early morning, most of the passengers took turns on the helicopter flight to Mitchell Falls (Punamii-unpuu, Map reference 14). This optional (extra cost) trip gave a superb opportunity to see the fractured landscape, as well as walk around the falls area and have a swim. Photo at right is Copyright 2006 by Len Zell and used with his permission.

Google Maps reference for the area. Mitchell Falls itself is to the right and up from the words “Mitchell River Nat’l Park” on the hybrid view. The helicopters picked us up from a small island (Wunumpurramurra, or Naturalist Island) in the body of water (Prince Frederick Harbour, not labelled) visible to the left and down from those words. Photo at right is an aerial view taken by Jean in 2004.

Two trips set out in the Explorer up the Hunter River (Map reference 13), which runs northeast from Prince Frederick Harbour (on the map, it points towards the words “Mitchell River Nat’l Park”). The first group were keen to see birds and crocodiles among the mangroves. Many birds were seen and heard, but no crocs. Photo right, of White-breasted Sea Eagle, is Copyright 2006 by Len Zell and used with his permission.

The second group got a somewhat different, though no less interesting, view of the river, as the tide had risen to cover the mud flats.

Meanwhile, back on board, we all had a chance to tour the engine room, where I was most interested to learn that the ship’s fresh water was mainly supplied through its onboard desalination plant.

In the evening, we all enjoyed cocktails on the Sun Deck while admiring another beautiful Kimberley sunset — made more spectacular in this area by smoke haze in the air from the lingering bushfires on the mainland. Photo on right is a similar scene at sunrise the next day.

Our first stop on Bigge Island (Map reference 15) had three fascinating sites for us to visit: one with rock paintings, one ceremonial rock pathway (initiation area?), and the beach with its collection of animal and bird tracks.

We split into three groups, rotating between our interpreters. 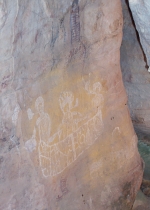 Chris Done showed us the rock paintings: Wandjini (photo above right), men in boats (left), and other figures (right).

Len Zell suggested that our inability to recognise tracks meant we would starve amongst plenty of food if abandoned on this beach! Later, we saw (and identified) the tracks (photo to right) of a turtle that had come ashore to lay eggs.

Mike Cusack led us on a short walk over rocks to overlook a ceremonial area (photo left). It is probably long disused but, but we did not enter. Photo right is the view as we headed back to the beach to be collected by the Explorer.

We went around to another part of the island and disembarked again, this time on a rock ledge. The main feature here was another rock painting area, one that required crawling and shuffling along on our backs. Here we saw some of the so-called “Bradshaw paintings”.

More of the paintings at this site.

Another set of paintings and an exterior view of the site, showing the overhang.

(left) Boarding the Explorer to leave Bigge Island. After lunch, Chris gave a talk on the rock paintings of the Kimberley.

Then it was on to our next stop, Sterna Island (Map reference 16). Sterna is the breeding grounds for a zillion terns of several species (photo right): Roseate, Crested and Lesser Crested.

At least one crocodile lives here, as evidenced by a mark where it rested on shore and then slid into the sea (photo left). With all these birds, it must be an everlasting banquet for the croc! Photo right of two terns is Copyright 2006 by Len Zell and used with his permission.

Overnight we rounded the northernmost tip of the Kimberley (Cape Londonderry, Map reference 17), experiencing the only rock-‘n-roll part of the voyage. Not too bad, but definitely noticeable after the wonderfully calm conditions we had experienced up to that point (other than the times when we deliberately went into rough water, for example at the Whirlpools and the Horizontal Waterfalls).

Today’s highlight was a visit to King George Falls (Map reference 18). Out early in the Explorer once again, we first explored a tributary of the King George estuary, spotting an osprey’s stick-nest on a cliff ledge (photo right).

At the end of this tributary was a waterfall, with very little water coming down it. The light was totally wrong to get a decent photograph.

Back into the main channel, we continued to King George Falls itself. I had seen these from the air in 2004, on a day flight out of Kununurra. In the photo to the left, you can clearly see the flat tableland above the falls, and the two gorges of the falls. Note the tiny boats in the photo.

On the right is the view we had from the Explorer as we approached the “peninsula” between the two gorges.

Left and right: the two waterfalls. Not a lot of water at this time of year, but you can imagine what they must be like in the wet season!

We drifted slowly along, having plenty of time to view the rocks and the waterfalls.

Some of our party chose to get “up close and personal” with the waterfall, courtesy of the Zodiaks (see photo to the right). Some (by their own choice) got a good shower!

Back to the Coral Princess for lunch, then to Tranquil Bay, our last chance to commune with the ancient rocks of the Kimberley. Photo left is of me on the beach there. This stunning landscape really must be experienced to be appreciated!

Reluctantly we bid goodbye to the Kimberley and headed east across the Joseph Bonaparte Gulf towards the Northern Territory and Darwin.

Our crossing of the Joseph “Blown-apart” Gulf was mercifully calm, after dire warnings of possibly rough seas. The staff explained that of 26 crossings, only 3 had been calm, and this had been the best of the lot.

So calm had it been, that we reached the Northern Territory Coast about 4 hours ahead of schedule, so we had plenty of time to visit Byrnoe Harbour (Map reference 19), where we spotted a croc and numerous birds. Then on to Bare Sand Island, a turtle research site, where there was indeed a turtle! Photo Copyright 2006 by Len Zell and used with his permission.

Back on board the Coral Princess, Mike presented an illustrated summary of where we had been and what we had done, then we attended the Captain’s farewell cocktail party on the Sun Deck. In the dark, we realised that we could see the lights of Darwin in the distance, and indeed we anchored in the harbour overnight.

In the morning we arose to see The Leeuwin, once again anchored near us, clearly visible in the dawn light (photo left). Reluctantly we bid farewell to the crew and each other, and boarded buses to be taken to our hotels or the airport. Photo right: Darwin at dawn.

I was staying at the Value Inn on Mitchell Street, just across the street from a new Coles shopping centre and in the vicinity of several backpacker hostels, including the Melaleuca on Mitchell next door. I arrived so early that the reception at the Value Inn wasn’t open yet, but the Melaleuca staff were very helpful, allowing me to put my luggage in their storage area and giving me access to the pool area to use the toilet. Then I settled down at one of their Internet machines to catch up on 11 days worth of e-mail.

I was lucky to get into a room at the Value Inn at 10am (checkin isn’t officially until 2PM, but a room was ready). I wandered around town a bit, but found it a bit warm and humid after the dry Kimberley air.

A bit more wandering around on Friday, but nothing all that exciting. After the past 11 days, I was a bit tired of absorbing new sights, and I had been here before several times, so mostly i just goofed off, read a book, and napped in anticipation of being awake most of the Friday night, since my flight to Brisbane was leaving at 01:40 on Saturday (I had booked the room for 2 nights).

The airport shuttle depot was just across the street, so I hauled my bags over there at 11:30PM on Friday. The plane left an hour late. Fortunately I had plenty of time in Brisbane before my flight to Airlie Beach, so the late flight caused no problem. I was flying on Virgin Blue, and had bought the two tickets separately, so I had to collect my baggage in Brisbane and recheck it for the second flight. This gave me a chance to use Virgin’s self-checkin machine and observe that their signage for where to go to turn in bags after getting a boarding pass was in need of improvement.

The flight to Whitsunday Coast was also late, but at last I arrived home, exhausted, to be met by Eric at the airport.